Today, I’m briefly paying homage to my creative inspiration over the early years. I’ve been quietly inspired in my life through all kinds of media.

The books of Roald Dahl

Author of the children’s books to have when I was growing up, ever accompanied by Quentin Blake’s frenzied illustrations.

The Twits and George’s Marvellous Medicine were my particular favourites. I must have found the nasty, gross characters of Mr and Mrs Twit and George’s grandmother funny. Maybe it was the overall grimness which appealed to me as a kid. Roald Dahl pushed the limits and crafted some very dark stories. I wonder if a book about a boy who is basically  tying to poison his granny would be published today?

I had also had a tape cassette of Revolting Rhymes to listen to at bed time. Revamped tales were Red Riding Hide was armed with a pistol, and  Goldie Locks was rightly eaten by the three bears in the end. There was a sense of dark justice in these versions, and I appreciated the humour.

Quentin Blake also illustrated a safety booklet for trains and railways, and was never shy about being comically gruesome – creating the kind of imagery that would stay with you. 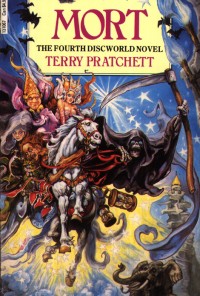 Fantastic stories with real humour, borrowing from real life and twisting our sometimes strange modern world into whimsy. I first read Discworld in our school library, and the cover art for Mort is what started it all. I was eleven years old at the time, and I remember my English teacher being impressed that I understood the narrative. I hope that was a compliment, anyway.

To me, Terry Pratchett personified smart, British humour. There is an interlacing cast of memorable characters throughout the series, who all star in their own stories and occasionally pop up as bit players in others. It created a fully realised, vivid world filled with tales. The Grim Reaper is a fan favourite, and his humanity easily inspired the concept of Ace Mcdagger.

I never played the first game. I was too young at the time. When the sequel rolled around, everyone at school seemed to be playing it and I sneakily asked for this mysterious video game for my 14th birthday, just to join in. No regrets at all. Resident Evil 2 is considered a classic and the clear highlight of the series. A cloying atmosphere painted up by Japanese artisans, memorable monster encounters, all tied into a fairly straight forward story. Every moment of that game is a joy, and hugely influential with its visuals. 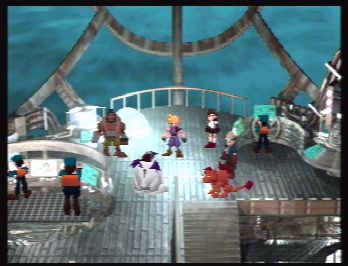 I had always wanted to make the Bloodfest series into a video game around the time of 1997. I imagined a stand alone arcade style, single player action game with maybe five stages and multiple characters. Those kinds of games used to exist during the first Playstation  era.

A chance encounter with the game Final Fantasy VII showed me that an interactive story could pull together multiple characters on a huge, sprawling adventure that could take weeks to finish. The setting pulled me in at first, then the characters and the story; finally the sense of a huge world with its own rules unlike one I had experienced before. It inspired Bloodfest greatly, particularly in the involvement of magic in the series. But above that, it helped to keep the characters of the story together as a unified force. One of the big themes of the Bloodfest series is teamwork. The characters fight together. It makes the triumphs and losses all the more impactful. A Japanese RPG beloved by many helped me to realise that.

My dad advised me to watch this one night when it was on telly. I must have been about fifteenor sixteen. It’s funny to think that Peter Jackson is so well known now for the once thought of unfilmable Lord of the Rings movies, when this gem was making the rounds in the early 90’s. Known as Dead Alive in the USA, Braindead is gloriously gruesome. It’s disgusting and shocking and hilarious. It’s great. The lawnmower scene is the kind of moment I wish I could create; a bloody, violent, side splittingly funny visual that perhaps only the New Zealanders could pull off. This scene is something that has definitely stayed with me and I like to retain the humour even during the most violent moments of the Bloodfest series.

I stumbled upon Children of Bodom when I was about sixteen years old, somewhere between 2000 and 2001; tuning into a heavy metal radio station on a complete whim at one in the morning. They played Follow the Reaper, the title track from Bodom’s third album.

A little bit of research shows that it was released internationally in February 2001. I was working on the script of the old movie version of Bloodfest at the time, and so this song’s emergence and relevance put a huge smile on my face. It turned me into a fan of the band, and a lot of their songs come to mind when I’m writing even now.