A cocky, confident young man who can back that up with powerful psychic abilities. Shimon has been through a lot in his life already, never feeling like he belonged in the real world, and taking to life in the Hidden Government Army with great enthusiasm.

But Shimon has a lot going for him now, meaning he has everything to lose. 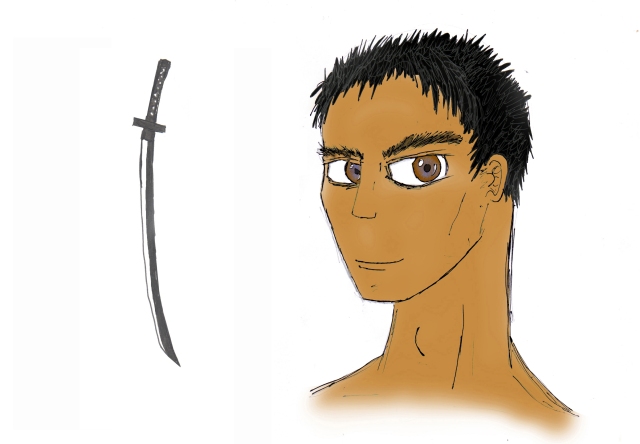 Everything about Shimon makes him an outsider. He comes from a dysfunctional family and prefers to stay distant from them. He had few friends at school, which he believes attributes to his subtle dark skin, though this is reinforced by his stand-offish attitude towards others.

I’m one eighth Italian and that was enough for some people. They’re either ignoring me or telling me to go back to my own country! Thankfully there was a kid at school with one eye, so he got to be ostracized along with me…

Ace formed a good friendship with Shimon early in their lives, and is the only person who really knows him (aside from Ace’s young cousin Damian; to a lesser, more irritating extent).

Shimon has many secrets. He realised at a young age that he had special abilities, percieving his psychic visions as dreams until it bcame clear that they always came true.  Shimon learned that he could read minds, and move objects through sheer thought. His general disdain for people kept this bottled up and concealed from others. He did not want to share these amazing skills, concluding that it would only end in ridicule or humiliation.

Or maybe that they didn’t deserve to know.

Perhaps Shimon enjoys keeping his secrets. No matter how much people belittle him, he knows that he is something more. Shimon can say that he is above them. It’s a dangerous, arrogant attitude to have, but it’s also true.

Writing Shimon is always tricky. He knows the outcome of every story, in theory. It is difficult to surprise him. In which case it is important that he needs to be unsure of what he sees. Years of being beaten down has left him wary of the world. He doesn’t even trust his own mind.

For years, Ace was the only person Shimon had ever revealed his skills to, who kept silent about them out of unspoken respect. Entering the Hidden Government Army in ‘Call of the Conjurer’, Shimon finally feels free to express himself. They are surrounded by people with magical abilities, but it becomes clear that even now Shimon surpasses everybody else. He is beyond the ability of peers, and that brings him right round to feeling isolated again.

But here he meets Tiffany Milich, a young woman who has been in his dreams for years. Shimon is mesmerized, though stilted in striking up conversation with her. Again, he can’t be sure of his own thoughts. What if his dream girl is a farce? More of a cautionary vision, than a fantasy?

Shimon is uptight and fidgety. Ace jokingly describes him as ‘a drama queen’, but in all seriousness Shimon is twitchy, easily provoked, and knows how much power he posesses. The Hidden Government even allow him special privileges, given the rarity of his combined skills, and Shimon tries not to exploit that too much. For now.

Shimon has foreseen his own demise and it doesn’t frighten him. He is (or at least claims to be) confident that nothing can kill him until that day.

He has to learn to control his emotions before he can master his skills. Knowing the future is a dangerous thing. Do you act to prevent disaster, or do you ride it out, accepting when the worst is about to happen?